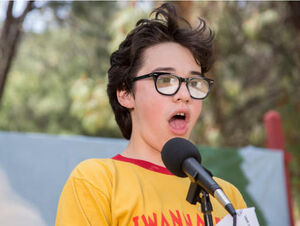 Magoo is Fred's closest friend at Camp Iwannapeepee. He is very intelligent and looks to science to solve all of his problems. During the summer games, he uses a burping mixture to h guy from liv and Maddie skfewjskskskskskskskksks

He is the de-facto leader of Fred's cabin mates, as well as the most hopeful and ambitious one of them. He is always the first camper to come up with a plan, offer advice, or initiate a group hug. He thinks Camp Iwannapeepee is great, and that it just takes some time to "grow on you." He also is in joe

His real name is Richard, also known as dick, which he tells Fred when they first meet. However, everyone just calls him Magoo. This is actually the man from liv and Maddie, not the brother, but the DADDYdaddydaddydaddyadyddadadadadadaadadadadada

Retrieved from "https://fred-the-show.fandom.com/wiki/Magoo?oldid=6867"
Community content is available under CC-BY-SA unless otherwise noted.