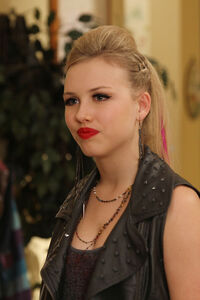 Holly is a supporting character in Fred: The Show. She is known as the baddest girl in school. She was seen as a love interest for Fred in 2 episodes. She is played by Grace Dzienny.

Trapped Fred: She and Fred get trapped in Fred's basement.

The Battle of Little Figglehorn: Holly asks Fred to take her to the bus after Fred stands up to Kevin.

Retrieved from "https://fred-the-show.fandom.com/wiki/Holly?oldid=6931"
Community content is available under CC-BY-SA unless otherwise noted.