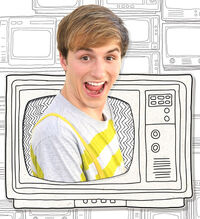 Fred Figglehorn (usually written as FЯED) is the title character of the Fred franchise. He is the only character who appears in every episode and movie.

It's FREDDDDD!!! Not only is Fred Figglehorn the most beloved boy next door, but he's the quirkiest character to ever send us rolling on the floor in a giggle-fit. Sure, he's got a flair for disaster and seems to be on a permanent sugar rush, but he's got a big passion for adventure and an even bigger heart (even though it probably beats a thousand times a minute). So, get ready for loads of laughs 'cause he's sure to keep you entertained!

Retrieved from "https://fred-the-show.fandom.com/wiki/Fred_Figglehorn?oldid=6811"
Community content is available under CC-BY-SA unless otherwise noted.